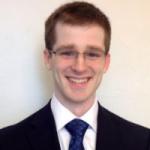 Jonathan earned a BS in Materials Science and Engineering from the University of Florida in 2014. He is a PhD student in Dr. George Truskey's Lab.

The cost to successfully develop a new drug in the United States exceeds $1 billion. This exorbitant spending is due to an average 13 year discovery-to-approval time and a 95% clinical trial failure rate. The current “gold standard” models in the drug development process, i.e. monolayer cell cultures and animal models, represent a large physiological gap from human tissue that makes it difficult to accurately predict the response of a therapeutic treatment. A microphysiological system (MPS) is an in vitro platform that uses human cells in three-dimensional organ systems that mimic in vivo tissue architecture and physiological conditions. My research focuses on integrating tissue engineered human skeletal muscle and human liver MPSs to screen drugs in a physiologically relevant system for toxicity and efficacy before clinical trials.