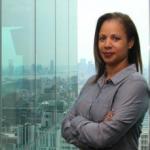 Cells sense changes in their environment and respond by altering their gene expression.  I investigate how cells manipulate membrane proteins, which has profound effects on disease progression. Cells orchestrate the density of proteins and lipids to govern adhesion and migration. From this knowledge, one can engineer drug delivery vehicles that complement the molecular patterns observed on cells to achieve strong, cooperative binding. I have employed these strategies in a model system of endothelial inflammation and in breast cancer metastasis. My lab has identified a new target and biomarker for triple negative breast cancer, examined the role of ligand/receptor cell adhesion by atomic force microscopy, and synthesized targeted drug delivery vehicles that demonstrate that nanoparticle ligand surface density alters gene expression. The basis for the targeted drug delivery platform lies at the intersections of biology, engineering, and medicine. We have used these vehicles to identify new strategies in the delivery of molecules and nucleic acids.

Debra Auguste, PhD is a Professor of Chemical Engineering at Northeastern University, prior to which she was at the City College of New York and Harvard University. She was trained as a Post-Doctoral Associate at the Massachusetts Institute of Technology under Institute Professor Robert Langer.  Her interests include drug and gene delivery, targeted drug delivery, stimuli sensitive materials, and scaffolds for tissue engineering. Dr. Auguste is the principal investigator on grants from the National Institute of Health (NIH), Office of Naval Research (ONR), Defense Advanced Research Projects Agency (DARPA), National Science Foundation (NSF), and the Juvenile Diabetes Research Foundation (JDRF). She is a recipient of various awards including; the Presidential Early Career in Science and Engineering- 2013, the NIH Innovator-2012, NSF CAREER Award-2011, DARPA Young Faculty Award-2009, Percy Julien Award for Outstanding Scientist of the Year-2008, ONR Young Investigator Award-2007, JDRF Innovation Award-2007, 1930 Wallace Memorial Honorific Fellowship-2003, and several fellowships. In addition, Dr. Auguste was named to the ‘50 Most Influential African Americans in Technology’ list in 2009. She received her S.B. in Chemical Engineering from the Massachusetts Institute of Technology in 1999 and her Ph.D. in Chemical Engineering from Princeton University in 2005.