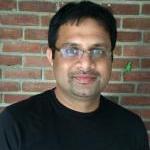 The recent advent of RNA-guided effectors derived from clustered regularly interspaced short palindromic repeats (CRISPR)–CRISPR-associated (Cas) systems have dramatically transformed our ability to engineer the genomes of diverse organisms. As unique factors capable of co-localizing RNA, DNA, and protein, tools and techniques based on these are paving the way for unprecedented control over cellular organization, regulation, and behavior. Here I will describe some of our ongoing efforts towards engineering this system for enabling therapeutic applications.

Prashant Mali received his undergraduate degree in Electrical Engineering from the Indian Institute of Technology Bombay, with a research focus on solid-state biosensors; and a doctorate in Biomedical Engineering at the Johns Hopkins University, with a research focus on human pluripotent stem cell engineering. During his postdoctoral fellowship in the Department of Genetics at the Harvard Medical School, he worked on developing the CRISPR-Cas systems for eukaryotic genome engineering. For his graduate work, he received the Siebel Scholar Award in 2011, and in 2014, he received the Burroughs Wellcome Career Award at the Scientific Interface. Mali joined the University of California, San Diego faculty in Fall 2014 as an assistant professor in the Department of Bioengineering. In 2016, he received the March of Dimes Basil O’Conner Scholar Award, the Kimmel Scholar Award, and was named a Kavli Frontiers of Science Fellow. In 2017, he received the Young Alumnus Achiever Award from the Indian Institute of Technology Bombay India. Research in his laboratory lies at the interface of basic science and technology development, with a core thrust in developing tools for engineering biology towards enabling gene and cell based human therapeutics.