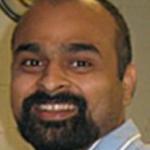 The Asokan Lab is focused on  synthetic virology and gene therapy. Our two-pronged, cross-disciplinary approach hinges at the interface of molecular biology, virology and genetics. One arm utilizes structural biology, protein engineering and directed evolution to generate viral vectors with novel function(s) to treat genetic disease. The other arm is focused on engineering RNA elements to modulate viral gene expression. In the past decade, we have made significant contributions towards dissecting and manipulating the structure-function correlates of virus-host interactions. This approach has yielded several gene therapy platforms  currently being evaluated in preclinical and clinical studies to treat genetic disorders such as muscular dystrophy, cardiac failure and neuropathies. Our overall mission is to engineer innovative technology platforms that enable transformative, new medicines.

Aravind Asokan is a Synthetic Virologist and an Associate Professor in the Department of Genetics and the Gene Therapy Center at the University of North Carolina at Chapel Hill. Aravind and his lab specialize in engineering synthetic virus-based tools for gene therapy and genome editing. His lab has been consistently funded by the NIH and has published widely on AAV biology and vector development. In particular, they have made significant contributions towards a variety of translational efforts using AAV gene therapy in genetic disorders such as muscular dystrophy, cardiac failure and more recently, CNS disorders. He founded StrideBio, a gene therapy company in Durham, NC developing novel AAV vector technologies and also served as a scientific co-founder of Bamboo Therapeutics (later acquired by Pfizer). He also serves as scientific advisor for Casebia and Gemini Therapeutics, chair of the Education Committee at the American Society for Gene & Cell Therapy and on the editorial board of several peer-reviewed scientific journals. He received his undergraduate degrees from the Birla Institute of Technology and Science in Pilani, India and his Ph.D. from the University of North Carolina.